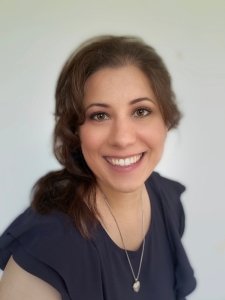 Sara’s third in her trilogy of Georgian Jewish romances, A Kiss After Tea, is now out. Besides the gorgeous romance we have come to expect from Sara, it delivers the conclusion of the jewellery competition, a compelling thread that runs throughout the series.

Can you please share the blurb for A Kiss After Tea?

Caleb Klonimus has been on the verge of proposing to his best friend’s little sister since he was eight. But the beautiful and accomplished Lizzie Pearler barely notices him – until he returns changed from a quest for jewels. As for Lizzie, she doesn’t think he’s marriage material.

But as Lizzie and Caleb join forces and work together toward the finals of the king’s competition for the crown jewels, sparks fly. Maybe it’s his gorgeous smile, or his muscular body – or Lizzie’s jealousy every time Caleb trains with his kung fu master, the young Jing … but somehow, they must overcome the near-impossible obstacles in the lead-up to the competition and make sense of love.

The jewellery competition is a key story element throughout the trilogy. What attracted you to writing about jewellery?

The series needed a father figure, and I know three real people who fuelled the Pavel character.

One is a man who survived the Holocaust with a few hidden diamonds and made it as jeweller in New York. Now over 90, his edge is his honesty. He will tell customers if a jewel is big and sparkly but not valuable, or if it’s small but valuable. He has two sons, one is a lawyer and the other is a jeweller, slowly taking over the family business. They can design anything and make exquisite custom pieces. I drew real inspiration from my interactions with them.

The other two were distant cousins, who were like Isaac Pearler and Pavel. They built a factory in Brazil that doesn’t exist anymore, but the story is still told in my family. I named a character after the one who travelled the world on a quest for diamonds. His real adventures fed my Diamond Dynasty series. I gave my books to his grand-daughter, and she said, ‘Wait a minute, I know where your inspiration came from.’ It still gives me goosebumps to think about the true stories behind my fiction.

Were you worried about the cliché of the Jewish jeweller?

I know how damaging clichés can be from personal experience. I like to pick apart and explain these clichés, but some of them are difficult to tackle. There’s a treasure trove of Jewish traditional tales hiding behind the myths we need to debunk. It’s all a contribution to embracing diversity and fairness, themes in my books.

Historically, Jews were stripped of many rights. They couldn’t hold property in Europe, so they had to find other ways to transport their wealth, eg. diamonds, rubies and emeralds. I wanted to show these historical elements while I’ve glossed over some other details such as when a certain building was built. My research is detailed. I’m even going to London this summer to see places in person that will be in the next series, but this is fiction and I take some poetic license. At the heart of my Regency era fiction is the nostalgia of the time, which I appreciate and honour from the bottom of my heart.

There are other clichés I’d like to explore in my books, eg. the criticism about the Jews being defined by the holocaust, which is why I set the story before World War II. Taking away ammunition from some clichés allows me to dig deeper into the anti-semitism that we often face in the world. Not much has changed in some respects even though we think we now live in a different world. There’s room to improve communication and to correct misconceptions against and even within Judaism. I hope my work makes a small contribution toward this goal.

If I throw all the Jews in this trilogy into one pot and make them clandestine wealthy jewellers, then I need to give a lot of substance to each one. They’re all hot and falling in love, but I’ve crafted them with depth and unique personalities and talents.

Can you tell us a bit more about talents of each jeweller?

I wanted to show each jeweller’s  specific talents and forms of creativity. It’s a broad field with room for art, geometry and history. The crown jewels are in the Tower of London and millions of tourists from all over the world pay to admire them. There are treasuries in castles all over Europe, and I love to imagine what the makers must have thought and experienced. In my travel this summer, I aim to research this and will post my findings on social media.

As I mentioned in my last interview, Fave from book one is a mathematical genius, who applies his talent to designing jewellery. He is brilliantly creative. Arnold in book two is an inventor, an engineer. He designs special tools for the jewellers to make their complicated designs.

In book three, we see that Caleb is extremely precise, able to produce intricate detail. He’s also efficient and able to save on material, eg. he made a tiara for the competition one-third lighter than would have been built by traditional methods. Lizzie can hold her own as the only female jeweller, something rare in the Regency period. She can do what Caleb does, only faster. Both enact what their grandfathers have taught them.

What made you bring Jing into the story?

The kung fu master is inspired by the real Jing, a family friend from Taiwan who’s teaching my son.

The Jews in my stories strongly hold onto their tradition, but their education – a luxury at the time – gives them an openness to other cultures. Fave and Rachel have a thing for Greek philosophy. Arnold enjoys dry texts of economics, like Adam Smith. I wanted Caleb to explore kung fu and with that, the rich Chinese philosophy. This way, Caleb can embrace things outside his comfort zone. But he also has some pushback – Lizzie offers resistance because her jealousy makes her prejudiced against the lovely Jing, who’s Caleb’s mentor.

From a higher level, I’m drawing on Jewish and other cultures to find universal truths. Jews are inherently open to learning, and I am always eager to learn from others, from books and from people. When we learn about other ancient cultures and philosophies everyone can be enriched. That is what I wanted to show with my characters.

Fun fact: Jing will get her own book soon!

How did you bring Arnold back in book 3?

Arnold is Caleb’s best friend. While they were in America, he set Caleb free to be more like an assimilated Jew – the makeover. Arnold’s future depends on Caleb’s success in the competition. Their families work together for the competition. Moreover, Arnold’s grandfather was Caleb’s dad’s best friend, who came to England with him when they were starting out. We will learn more about that in the prequel I will publish next year.

How did you do the book covers?

My talented designer Deborah Bradseth is a Mom running her business from home, like me. I told her a lot about the books and characters, and she developed the vision. I wrote the first book without the cover, and she outfitted it. In English, we say, ‘Don’t judge a book by its cover,’ but there’s a German saying, ‘The outfit makes the person.’ Deborah is dressing my books for the occasion – they get to glam up just like the Pearlers. We want to be in the best shape for our readers and new friends.

The flair of strong heroines comes across in the covers and Deborah shows the nostalgia of the historical fiction elements. She is currently working with me on the covers for the French translations for the first series, Infiltrating the Ton. Deborah also made exquisite covers for the audiobooks, so that they are different but recognizable matches for the e-books and paperbacks.

How did you do the translation to French?

I found a talented young woman who is going into her senior year at Tufts University. She’s interested in working in the publishing industry, so we’ve developed a bit of a mentoring relationship.

She has almost finished translating book one and probably will go into book two. She’s really devoted and was so excited when she translated the first kiss. Hopefully, she’ll also read for the French audiobooks when we start producing them.

What is ‘Loving Arnold’ the novelette?

It’s a special bonus book for current and future readers in addition to the recipe collection that accompanies the books (free if you sign up for my VIP newsletter).

After book 2, I wanted to see more of Arnold – I have a huge crush on him – and the novelette will be all about Arnold and Hannah. It is set in parallel with the existing series but gives more information. For those new to the series, it’s a good way to meet the characters and to get a feel for my writing style.

I am producing the audiobooks for this trilogy in English. Then I’m writing a prequel to bridge to the second series about orthodox Jews who are not in hiding, so they need to overcome obstacles from a different direction. We get to question what will happen if everything the Pearlers hoped for comes true and to see the new hurdles.

Next time: a story that short listed in AWC’s Furious Fiction last year: That Moment When

2 thoughts on “Sara Adrien on The Jewellery Competition”

In the run-up to Christmas, my gift to you is my second short story that was short-listed in AWC's Furious Fiction Last year. The day Santa walked off the job. Enjoy!
Loading Comments...
%d bloggers like this: