Award-winning author Kate Murdoch is about to release her second novel, The Orange Grove. Set in early 18th century France, it delves into the murky relationships between a nobleman’s five mistresses. Kate has drafted and is editing her third book, The Glasshouse, and ideas are percolating for her fourth. How does she manage books at different stages? What does her writing process look like? Read on to find out.

Your next novel, The Orange Grove, is due for release on October 11. Can you give us a teaser?

This is The Orange Grove blurb. 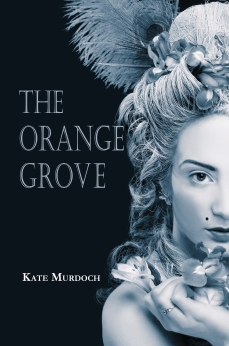 When status is survival, every choice has its consequence.

Blois, 1705. The chateau of Duc Hugo d’Amboise simmers with rivalry and intrigue.

Henriette d’Augustin, one of five mistresses of the duc, lives at the chateau with her daughter. When the duc’s wife, Duchesse Charlotte, maliciously undermines a new mistress, Letitia, Henriette is forced to choose between position and morality. She fights to maintain her status whilst targeted by the duchesse who will do anything to harm her enemies.

In a society where status is a matter of life and death, Henriette must stay true to herself, her daughter, and her heart, all the while hiding a painful secret of her own.

Where did the idea for this The Orange Grove come from?

I was inspired when I read Economic and Social Conditions in France During the Eighteenth Century by Henri Sée. There is a quote from the actor Fleury about a nobleman at the time. Fleury said,

‘The prince of Soubise was not content to throw gold in the path of his queens of the boudoir—there were a dozen of them—; since he gave each one of them the same household, the same livery and an equipage of the same kind, people remarked when they saw the carriages of his mistresses passing: Here comes the family of Soubise!’

I found this intriguing. My first thought was: how did these women relate to one another and to his wife? Did they form friendships and how much animosity was there? This was enough inspiration to start writing.

What other research did you do for this book?

I read non-fiction books about Louis XIV and his mistresses, his memoirs, the diary of Madame de Sévigné, the diary of Elizabeth Charlotte Madame Palatine, novels set in the period, watched movies and looked at portraits of nobles of the period at the Louvre.

It was important that my book conveyed visual decadence, so there was a lot of internet research about the rooms at Versailles (which I’ve also visited.) I studied the landmarks of Blois using Google maps and other resources. To give authenticity to the tarot reading scenes, I learnt to read tarot cards.

How did social status within French society at that time influence the book?

Society was delineated into levels under the three estate system. The majority of people, peasants and the bourgeoisie, were called the third estate. The second estate was the nobility. The first estate was the clergy. At the pinnacle of this structure was the King, who was exempt from being in an estate, being more akin to a God.

The stakes were high for many, but particularly for the second and third estates. Their survival was dependent on position, as there was no safety net for the poor. Numerous factors influenced status, but nobles who had been presented to the King and lived at court ranked higher.

The rivalry I depict in the novel is based on this battle for status, as it determined their ability to rise or fall within the system. The overtly opulent lifestyles of court nobility and lack of cohesion between them ultimately led to their downfall. I set the book before the revolution, when the seeds of discontent were being sown.

How did your experience at a girls’ school feed into the book?

I was in a ‘bad year’ at my school, with a high quota of dominant and not overly kind girls. Teenage girls can be a petri dish of emotion; their hormones can make them less empathetic, more self-centred. Of course, adults aren’t exempt from this. Women’s relationships can be so supportive, but can also turn negative. School was stressful, but surviving this competitive and brutal environment gave me a certain strength.

I drew on this experience to create the dynamic of malice and rivalry in the story. It informed the scenes of one-upmanship and cattiness.

Can you describe your novel writing process?

I research both in the months before each project and while write my first draft. It’s crucial for accuracy, but also to fuel the writing itself. Certain facts and visuals inspire entire sections of the narrative, so I’m always collecting from different sources.

I write sequentially, very slowly, and I try to make the initial draft as ‘clean’ as I can to ensure the next draft is focused on structure and narrative rather than smaller errors.

How do you manage having novels at different stages at the same time?

At the moment my brain is very segmented and kind of chaotic. I’m organising a number of things such as reviews and my launch for The Orange Grove; I’ve just been on a two-week residency at KSP in Western Australia, so I planned my workload for that; and I’m working on edits for my third novel, The Glasshouse. Also in the mix is research for a fourth novel. I love it all, but I write a lot of lists and make notes to keep from overwhelm.

How does this translate to a daily/weekly routine?

My routine changes depending on where I’m at in the process. Currently, it’s more organisation/planning than actual writing. During publisher edits, it’s working all day every day to get the changes done as quickly as I can. In quieter phases, it’s writing for a block each day interspersed with social media.

How does life as a published author match your expectation?

It’s been quite different to what I expected – all consuming and multi-faceted. I had to learn skills like public speaking and self-promotion, not easy as an introvert. The plus side is that doing so many new things has built my confidence and I’ve learnt a lot about myself. I’ve found it to be a huge impetus for personal growth because self-belief becomes important to be strong enough to face all the challenges that arise.

Next time: the next Mansfield interview, Theresa Commadeur on Dealing With Change
Next author interview: Kirsten Alexander on Riptides, her latest novel set in Queensland in the 1970s