Women’s fiction author, Lisa Darcy, has just released her ninth novel, Should You Keep a Secret? The book poses a moral dilemma about whether or not to tell a friend something shocking about her husband. It also dives into the lives of three friends, three women facing different issues. Its emotional range will take you from laughter to tears.

Tell us about Should You Keep a Secret? 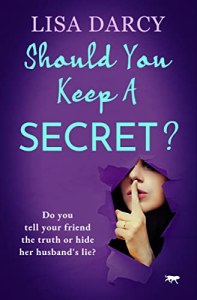 During a night out, Stella and Carly accept an invitation to a local party, but the scene they find there is not what they expected. It’s a swingers’ event—and their friend Jesse’s husband is there among the swingers.

The two women aren’t sure what to do. Stella is inclined to keep quiet, while Carly is determined to tell Jesse the truth.

Meanwhile, angry threats from Jesse’s husband warning them to keep their mouths shut only make the situation worse.

As dark secrets about Jesse’s situation are revealed, Stella and Carly will make some life-changing discoveries of their own.

How did the idea originate for Should You Keep a Secret?

There was a piece in the local paper about a raid on a swinger’s party in the next suburb.

A couple of months later, I was having New Year’s drinks with girlfriends at a local pub – and like Stella and her friends, by the time we caught up, it was almost the end of January. One of my friends asked everybody what their New Year’s mantras were, and we collectively groaned.

But again, it got me thinking, what a great way to begin a novel … making New Year’s resolutions and having a defining mantra for the new year. Usher in the positive and wipe the slate clean from the previous year.

When I combined the two thoughts, they formed the basis of Should You keep A Secret?

What did that newspaper article make you feel?

I read it and thought, Wow! Swingers? Just up the road from me? How embarrassing for those caught at the party.

If I was a swinger, I wouldn’t go to a local event!

What would you have done in Stella or Carly’s shoes?

Stella, who works with Jesse at a library, is inclined to keep quiet. She doesn’t want to poke her nose into someone else’s marriage, and on top of that, she knows Jesse is facing a potential job loss. The last thing Jesse needs is more stress.

Carly, on the other hand, thinks telling the truth is the right thing to do.

I understood both women’s point of view and hope their reasons come across as plausible to readers.

If I was faced with a similar dilemma, I hope I’d be brave to tell my friend their husband was having an affair. However, I’d definitely have to pick the right time and setting to reveal the truth. Fear about shooting the messenger is real (metaphorically speaking!).

If the tables were turned, would you want to know?

Yes. Hurtful as it is, I’d want to know, but only if it was substantiated, not just gossip. Some relationships do recover from infidelity.

Going back to Should You Keep A Secret?, I wanted to be clear that as the author, I wasn’t passing judgement on Steve’s sexual preferences. It was his lies and betrayal that needed to come to light. It was clear Jesse didn’t know about Steve’s partying. If she did, Steve wouldn’t have threatened Stella and Carly to make them keep quiet. So yes, I’d want to know.

What other issues are in the book?

Carly is bereft that her oldest son has left for a gap year in the U.K. Carly’s second son, who she also adores is about to graduate from school and will soon be leaving home as well, and her husband is a borderline workaholic. Carly’s grief and loneliness leads to self-destructive behaviours as she struggles to find her purpose.

Stella is a happy divorcee. She loves her ex-husband Terry, but the marriage has run its course. She’s not looking for a new romance, but it’s within reach. However, first she needs to sort out several domestic issues, not least of all her ailing ex-mother-in-law.

Meanwhile Jesse has crippling anxiety, which is not helped by Steve’s indifference and emotional abuse. At the core of Jesse’s story is the premise: what if something you thought to be true turned out to be false? A lie?

As with these characters and real life, circumstances can change in the blink of an eye, and often do. How do you react to your new situation? Your new reality? This is what Stella, Carly and Jesse grapple with.

What tips can you give to authors from writing this book?

I got a little nervous writing about the sex party and the aftermath in Should You Keep A Secret?, but if I agonised over every word I wrote (and said) I’d have been institutionalised by now. Therefore, my advice to authors is that you can’t worry about what friends and family will think about your characters and plot, or your writing and scenes won’t flow.

Write real, flawed and authentic characters, whether they’re unlikeable, sociopaths or lovers. Write truthful portrayals, otherwise you might never get any words down let alone complete scenes. You’ll be too busy second-guessing friends and family (who, let’s face it, might never read your work, anyway!).

In your novel, as long as the evil mother-in-law with a penchant for seducing young men is not actually based on your own mother-in-law, and you’re not reliving word for word, the huge family fight circa Christmas 2021 where the uncle threw wine over his sister before storming out and your husband admitted to having an affair with the baby sitter, culminating in several restraining orders being issued (unless it’s memoir), you have to be free to create characters without fear of offending people.

Writing fiction is all about creating characters who are larger than life. They’ll do things that are far more outrageous than real people (with good reason and to advance the plot line) … and if Uncle Ted recognises himself as the slobbering bore in your novel? That’s his problem!

7 thoughts on “Lisa Darcy Asks Should You Keep a Secret?”

A thoughtful #interview with @lizshickauthor about her debut #novel, The Golden Land, and a topic close to my heart – writing about #expatlife.
Loading Comments...
%d bloggers like this: